Want to advertise on this website? Create your advert now. 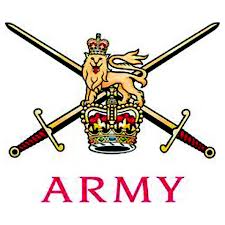 The Army Cadet Force is for 13 to 18 year olds in the UK who can handle a real challenge.
More Information

The British Army consists of the General Staff and the deployable Field Army and the Regional Forces that support them, as well as Joint elements that work with the Royal Navy and Royal Air Force.
More Information

Information about careers in the Army. A very good overview for the uninitiated.
More Information

Lots of information on joining the British Army, with links to the Army Jobs WEbsite and how to rejoin.
More Information

The British Army is actively engaged in operational duties across the globe - from peacekeeping to providing humanitarian aid, from enforcing anti-terrorism measures to helping combat the international drugs trade.
More Information

Queen Alexandra's Royal Army Nursing Corps.
The QARANC (Queen Alexandra's Royal Army Nursing Corps) has served the nursing and medical needs of the British army, their allies, prisoners of war and local civilians since 1854.  In modern times QARANC personnel serve in NHS hospitals alongside civilian staff and at Ministry of Defence Hospital Units. QA's work alongside the army, navy and Royal Air Force (RAF) in field hospitals alongside the Royal Army Medical Corps (RAMC) and with units and battalions with a variety of regiments and corps in the field and in Medical Units at camps throughout the UK and the world.
More Information

The TA is an essential element of the British Armed Forces. It forms one quarter of the British Army, playing the vital dual role of reinforcing the Regular Army and serving local communities in times of need. And it is the chance for thousands of civilians to satisfy their need for a challenging new experience.
More Information
Top

The Army's national charity which provides help for Soldiers and their families.
More Information
Top

AFF is a registered charity that acts as a unique two-way communications link between the British Army and its families. Find out more about AFF and its worldwide service to Army families on this website, including: where and how to find us; how we represent your views and raise your concerns; how to access our training and employment advice; and the latest news, including the AFF Families' Journal, YOUR magazine.
More Information

The charity provides timely practical and financial support to four generations of Army families, the physically disabled, the mentally ill, the homeless, the unemployed and the elderly.

In the spirit of 'a hand-up rather than a hand-out' the Fund promotes and encourages self-reliance, self-confidence and a better quality of life.

The Army Welfare Service aims to provide a Welfare Support Service to assist with the challenges that arise in personal and service lives.
More Information

BLESMA is a National Charity for Limbless and Ex-Service Men and Women, their dependants and Widows. The objectives of the Association are to promote the welfare of all those of either sex who have lost a limb or limbs, or one or both eyes, or the use of limbs as a result of service in any branch of Her Majesty's Forces or Auxiliary Forces and to assist needy dependants of such service limbless. We will also help those who lose a limb after service.

Forcesline is a free and 100% confidential helpline that is completely independent of the military chain of command. Experienced civilian staff provide a supportive, listening and signposting service for serving personnel and their families as well as former members of the Armed Forces. You can talk about anything including personal concerns, worries and problems.
The telephone support line is available 365 days a year and can be accessed from anywhere in the world. The line is open from 1030am - 10.30pm (UK local time).

The HIVE organisation is a worldwide tri-Service information network available to all members of the Service community. HIVE Information Centres offer an extensive range of information on the availability of unit and civilian facilities, local schools and further education, housing, healthcare facilities, employment and training opportunities, relocation and local interest.
More Information

We are the national charity helping serving and ex-Service men, women and their families, including widows and widowers in need.

Eligibility for our help is one day's paid service in any of HM forces and National Service. We also help those who completed a period of satisfactory service in the Reserves.
More Information
Top

The Army command structure is hierachical with Commander Field Army and Commander Regional Forces controlling groupings of units based around Divisions and their Brigades.

Within these Brigades are Major Units, regiment or battalion-sized and Minor Units, smaller company sized sub-units or platoons.

All units within the service are either Regular (full-time) or Territorial Army (part-time), or a combination with sub-units of each type.

The Royal Engineers website. Fascinating. It includes the past present and future of this remarkable regiment - and how to join it. Give it a click!
More Information

The Territorial Army is part of Britain's reserve land forces. Together with the Regular Reserve the TA provides support to the Regular Army at home and overseas. 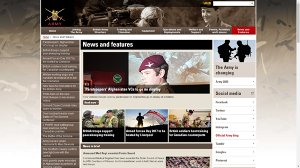 ArmyNET is a controlled-access website for serving British Army soldiers and their families.
More Information

The online newsletter and information service for Tidworth, Netheravon and Bulford Garrison communities on Salisbury Plain.
It has lots of very useful links for all Service Personnel and their families.
More Information

Storybook Soldiers provides a link between parents who are deployed and their children. Soldiers are recorded reading a bedtime story for their children.  Music and sound effects are added by trained volunteer editors. The CD is sent to the child who can listen to it, not just at bedtime but on car journeys and at other times of the day.

Storybook Soldiers was set up at the beginning of 2007 in Tidworth.  The scheme is now available across the Army and has been copied by the Royal Navy and the RAF.

This Microportal is built on the 2day Microportals platform which provides you with 3 click access to local and global information crucial both to your personal and working life. The platform provides live local data on transport, what's on, accommodation, eating out, shopping, sport, religion and weather as well as comprehensive reference and resource sections including TV, radio, online shopping, route planning, health, education and more.